A stroll in the Royal Botanic Garden , Sydney

The Gardens are a bit of nature in the heart of the city of Sydney.

The Garden covers 30 hectares and everywhere there are reminders of Sydney’s beginnings. The Garden is situated on the land of the Indigenous Cadigal people. This was where Australia’s first penal colony was established in 1788 when 11 ships, the First Fleet, carrying over 700 convicts, landed here.. In 1816 the Botanic Gardens of Sydney was founded on this site by Governor Macquarie as part of the Governor’s Domain. Charles Fraser was appointed as the first Colonial Botanist in 1817, establishing the Botanic Gardens as the oldest scientific institution in Australia. (Source: http://www.rbgsyd.nsw.gov.au/)

Number of visitors: about 3 million (Royal Botanic Gardens) and 4 million (Domain) per year

And why am I sketching in the Gardens ???

I am involved in the Royal Botanic Gardens Great Garden Sketchabout, which is being held in March and April. They are calling on all artists aged two to 100 to join the Great Garden Sketchabout on Saturday afternoons or whenever you fancy a wander in the Gardens with pencil and sketchbook. Meet other sketchers to share your drawings and adventures.3.30 pm ‘show & tell’ at Garden Kiosk Follow the blog at gardensketchabout.blogspot.com/

It took me two hours to do my walk and that's because I was drawing along the way. My first stop was the Queensland Bottle tree and then a Moreton Bay Fig. The bottle tree is named because is stores water in its trunk . They are not always as swollen as this one, and usually upright. This must be quite old , as its limbs have need to be supported by blocks put in by Garden staff. 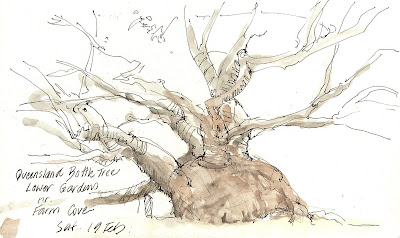 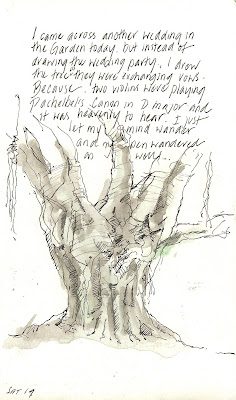 The Moreton Bay Fig is an evergreen tree that can reach heights of 60 m (200 ft).[The trunk can be massive, with thick, prominent buttressing, and reach a diameter of 2.4 m (8 ft). The characteristic "melting" appearance of the Moreton Bay fig is due to its habit of dropping aerial roots from its branches, which upon reaching the ground, thicken into supplementary trunks which help to support the weight of its crown.


I then stopped in the shade of the rock wall to take in the stunning view (and wishing that I had bought a picnic lunch- and sunscreen) The beautiful rock is a sandstone I believe. 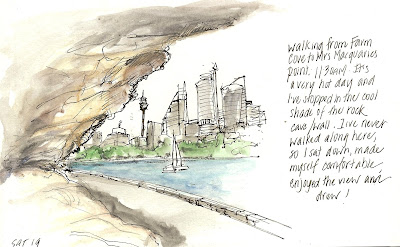 and then finally out to Mrs Macquaries Chair . Named because 1816 Governor Macquaroes wife supposedly liked to sit here . It is a fantastic view of Sydney Harbour, city and out to the headlands. 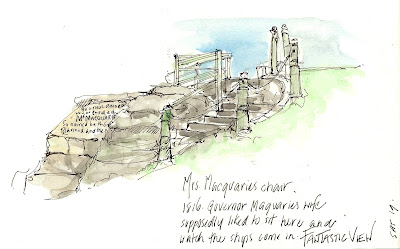 Posted by alissaduke at 5:55 PM

We'd love to hear from you, your questions, comments, observations! Please feel free to comment, feedback is important to us.

You're visiting the award-winning Sketching in Nature, a group blog began in April of 2009; it's grown both in readership and contributors since then, and just gets better all the time.

Watch this space...become a follower...bookmark the blog...but don't miss this international look at nature through our observant artists' eyes.

Comment, please! We love to know what you enjoy about our blog.


NOTE: Spammers, your comment will be removed and reported to Blogger. Sorry, but this is not the place to make a generic remark and tout your business.

Our sister group is here--click on the image to visit!


Our correspondents are here by invitation only, from habitats and habits all over the globe. We'd love to have you check in frequently to see what's going on in nature around the world, subscribe to posts, become a follower of the blog--or feel free to join our Flickr group pool by the same name if you enjoy working and learning in nature!

Cathy Johnson (Kate)--please contact if you have a question
kate@cathyjohnson.info

Feel free to put this logo on your blog, with a link! 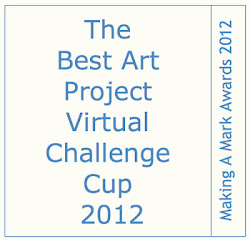 Look for us under "Art" on the Nature Blog Network. We're honored to be members! 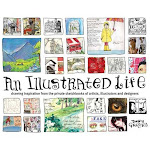 Click on the image to see an array of recommended books, DVDs, CDs and reviews.

Correspondents, feel free to post the graphic above to your own website, and link to this networked blog!